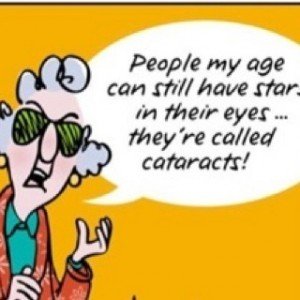 “People Would Rather Lose a Limb Than an Eye” is the title of an article I recently read .  A survey of 11,000 people from around the world found that “if forced to choose, people would rather lose their sense of smell, sense of taste, hearing, one of their limbs, or 10 years off their life than their eyesight”.   This does not surprise me in the least as sight is such a precious gift.  But the survey also reveals that just 21% of those had a regular eye exam over the past five years and a majority of those had not visited an eye doctor because they had clear vision.  It is obvious from this survey that there is a disconnect between eye sight and eye health.   I would like to tell you about two patients I recently saw who sadly fall right in line with the findings of this survey.
A few weeks ago, 2 new patients in particular came to me just for a “routine eye exam”.  The first patient was a white male in his early 60’s who was coming in with his wife “just to make her happy”.  He could not remember when his last eye exam was.  The other was a woman in her late 40’s who had LASIK 7 years ago and hasn’t had an eye exam since her follow-up visits with the LASIK center.  Both of them claimed to have good vision (which they did) and had no complaints with their eyes.  The examinations were going well until I looked inside the back of their eyes, and specifically their optic nerves, which looked very suspicious for glaucoma.  Glaucoma is a slowly progressive atrophy of the optic nerve.  There are no symptoms until the nerve is just about completely damaged, at which point there is a loss of peripheral vision.  But by then it is way too late.  I currently am doing more tests on these two patients before I officially diagnose them with glaucoma, but the diagnosis seems just about certain.  The treatment will be eye drops for the rest of their lives to lower the pressure inside the eyes, but I am especially concerned for the young woman who has potentially 30-40 more years to live. My job now is to prevent any further death to her optic nerve so that her sight outlives her.  The unfortunate part of these two examples is that glaucoma (and many other eye diseases) could have been detected earlier if only the patients had come in for their “routine eye exams”.  If it has been a while since your last exam, give me a call to schedule an appointment.  And if you have kids who have never had a real eye exam (the school nurse doesn’t count), I recommend an appointment for them.  “Don’t wait until after it’s too late” (I made up that rhyme).

And now for some totally useless information

Did you know that anatidaephobia is the fear that somewhere in the world a duck is watching you?

Or that four is the only number that has the same amount of letters as its actual value?

Sunglasses on Sale- 25%off…

…frame and lenses through April, 2013.  We have a bunch of new sunglasses in stock and they would look better on you than sitting on our shelves.  There are both womens and mens frames in many different styles with or without a prescription.  Spread the word- let your family and friends know.  Make yourself look good while protecting your eyes and the skin around your eyes from harmful UV light that can cause such conditions as macular degeneration and various skin cancers.  Sorry, this discount can not be combined with vision benefits.

Thank you for taking the time to read this, and thank you for entrusting me with your eye care.  If you had a good experience, let me know how I can make it better.  If you had a great experience, please put it down in words so that I can put it on the website and tell the world.  And if there is something I can do better, you can email me personally at drmike@normandyopticalcompany.com.