We have known for many years about the dangers of ultraviolet (UV) light. UV light is a leading cause of skin cancer and is a risk factor for eye conditions such as cataracts and macular degeneration. However, it seems that the hot topic in eye care these days is the damaging effects of blue light, also known as high energy visible light. I recently read an article in an optical publication which explains what blue light is and why it is damaging.

Blue light is part of the visible spectrum, which is produced naturally from sunlight. It is necessary for our survival, as it regulates the production of a hormone called melatonin. The presence of blue light stops the production of melatonin, which tells our bodies that it is daytime and we need to be awake and alert. Without blue light, melatonin is produced which makes us sleepy and tells us that it is time to be at rest. Blue light also allows us to perceive colors properly.

Blue light is also produced artificially by electronic devices such as mobile phones, tablets, e-readers, “high-def” televisions and computer monitors, and compact fluorescent light bulbs, all of which are increasingly becoming part of our everyday lives. As “old fashioned” CRT TVs and incandescent light sources are being phased out, and printed books, magazines, and newspapers are becoming a thing of the past, we are being exposed to a high amount of blue light, which is not necessarily a good thing.

Unfortunately, recent studies have found that blue light is harmful to our eyes. It can cause death to cells in our retina, which is the thin membrane inside our eyes. High energy light can also cause cataracts and can cause further progression of macular degeneration to those who already have the condition. Children under the age of 18, who, on average, spend over 40 hours a week using digital devices, and those who have lens implants from prior cataract surgery are most at risk. In addition, the use of devices that emit blue light up to an hour before bedtime suppresses melatonin production and tricks the body into thinking it is daytime, thus disrupting our sleep cycle.

So, what are we to do to protect our eye health? Short of giving up our electronic devices (I can hear my teenage daughters screaming now), decreasing the brightness on your screens and holding devices further away can help decrease your exposure to high energy light. In addition, there are new eyeglass lenses and lens treatments that filter out harmful blue-violet light while allowing blue-turquoise light to pass through. At Normandy Optical, while the Crizal non-glare lens treatment is still very popular, we are seeing an increased interest in another type of lens treatment called Prevencia, which reduces glare and blocks harmful UV and high energy blue light. 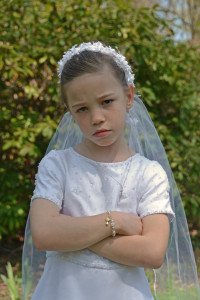 When it comes to taking pictures, especially for special events, my motto is “you can never take too many.” By the expression on my daughter’s face, however, I think she disagrees. After about 5 minutes and 20-25 shots, she was done. This is my favorite, although I did manage to get one that will look nice on the mantle.

Stuff Going on at Normandy Optical 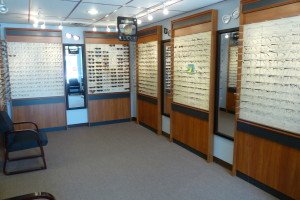 If you haven’t been to the office recently, the optical area was totally re-done in April. New displays, mirrors, and lighting were installed which allow us to showcase more frames in an organized fashion and also make the room appear larger. I am also excited to announce that we have brought in the Kate Spade designer collection of eyeglasses and sunglasses for women. Purchase a Kate Spade frame from now through June 30, 2014, and receive 15% off. In addition, check out the Normandy Optical home page for discounts on our Frames of the Month.

Lastly, a favor to ask…

As most of you may know, it is very important to show up near the top of the page when it comes to Google, especially for a small business like mine. One way to appear higher up on the page (and make us look good to new patients) is to have favorable reviews. So, IF you have a Gmail account, and IF you have something really good to say about us, then search for Normandy Optical on Google and write a sentence or two about us. I would greatly appreciate it.