Good news for chocolate lovers!  Results from a study published in the journal Appetite titled “Chocolate intake is associated with better cognitive function,” showed that processes such as visual-spatial memory and organization, working memory, and abstract reasoning were all significantly improved with frequently eating chocolate—particularly in women.  In addition, findings from the The American Journal of Clinical Nutrition “Cocoa, Cognition and Aging (CoCoA) Study” clearly provided evidence that daily consumption of cocoa can improve cognitive function, including processing speed and attention in healthy, elderly individuals.  The improvements were seen immediately after eating chocolate and also over an 8 week period.

But of course there is a catch- not all chocolate is created equal.  Cocoa is a rich source of flavonoids, which is the compound responsible for better brain function.  Unfortunately, sweet, milk chocolate that most of us love to eat only contains roughly 7-15% of cocoa.  But dark chocolate can contain anywhere from 30-80%.  Because of its  numerous benefits, including acting as a powerful antioxidant, boosting our immune system, and raising HDL (good) cholesterol levels, cocoa is considered a “superfood” along with almonds, sweet potatoes, blueberries, cinnamon, and others.

It was reported last week in the Philadelphia Inquirer that the first gene therapy to restore sight was recently approved by the FDA.  The treatment, which will be called Luxturna,  involves a once-per-lifetime injection.  It was developed locally by Spark Therapeutics and researchers at the University of Pennsylvania and Children’s Hospital of Philadelphia.

The treatment is based on research started decades ago, and it is the first therapy in the U.S. to target mutations in a specific gene.  A copy of a healthy gene is injected directly into the retina. Researchers hope that the approval of Luxturna will lead to advances in the treatments for other inherited retinal diseases, of which over 260 genes have been identified.   And by the way, analysts are predicting a price of 1 million dollars ($500,000 per eye) for this life-changing treatment.

Winter Humor (not if you’re a snowman) 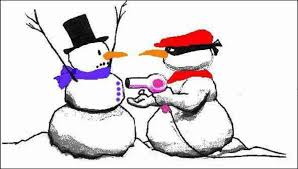